I can think of no other veterinarian who profoundly influenced through his professional lifetime, the health and wellbeing of this whole region of this country, than Charles Allen Cary. 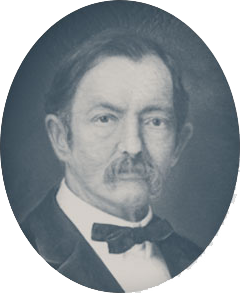 One Health a Proud Tradition at Auburn College of Veterinary Medicine

Fittingly, it was an Auburn veterinary alumnus — Calvin W. Schwabe '54, legendary epidemiologist and professor emeritus at the University of California-Davis — who in the 1980s first popularized the term “One Health,” referring to an approach recognizing that the health of people is closely connected to the health of animals and our shared environment.

Fittingly, because the One Health concept has been at the core of everything we do in the Auburn University College of Veterinary Medicine, from the very beginnings of the program until the present. Dr. Charles Allen Cary, who became Auburn's first veterinary professor in 1892, was one of the earliest pioneers of the One Health idea, conducting veterinary clinics for local farmers and lobbying the city of Montgomery to begin meat and dairy testing. As a result, the city later became the first in the nation to implement food supply safety initiatives through food inspections.

Dr. Cary continued to be an early champion of what would become today's One Health concept throughout his long and distinguished career. His Tuberculosis Eradication Program among Alabama dairy herds proved effective after years of intense, state-wide effort during which he and his team tested more than 60,000 dairy cows. As a result of combined API and USDA efforts led by Dr. Cary, Alabama became one of the first states in the nation to implement the use of Tuberculin to detect TB in cattle, enforce public meat and milk inspection and incorporate the pasteurization process.

Today, Dr. Cary's emphasis on the importance of the One Health idea continues to be an Auburn veterinary medicine core value. Recent examples abound, from Auburn clinicians participating in a revolutionary National Institutes of Health-funded clinical trial consortium to evaluate immunotherapy for both human and canine glioma brain tumors to Scott-Ritchey Research Center scientists pioneering a potential cure for GM1 gangliosidosis, a rare, neurodegenerative disease found in animals and humans.

For well more than a century now, Auburn veterinary medicine faculty and researchers have improved the health and safety of both humans and animals across Alabama, the U.S. and the world. It is a proud tradition we are totally committed to continuing, both today and far into the future.

Auburn Vet Med enters into a five-year partnership with the USDA-Agricultural Research Service to establish the new Animal Health and Agro-/Bio-Defense (AHAD) program to serve as a southern regional node in the Coalition for Epi Response Engagement Science (CERES).

For the first time in history, students transition to remote learning in the spring of 2020 due to the quickly spreading COVID-19 pandemic.

College of Veterinary Medicine ranked first in known Auburn disciplines through a national survey of respondents with no known Auburn University connection.

Next-generation Varian Edge linear accelerator installed for non-invasive stereotactic radiation therapy to accurately target tumors and other abnormalities without an incision or the need for recovery in a hospital setting — the only one in the U.S. for veterinary use.

SAVMA bovine palpation team wins national championship, marking its 11th national title since 2000 — the most of any veterinary medical program in the U.S.

Auburn’s Veterinary Teaching Hospital ranked among the top five in the U.S. for client satisfaction.

Custom standing CT installed to aid in more accurate diagnosis and treatment of injuries and diseases of the large animal head and neck — one of the few in veterinary use nationwide.

Small Animal Teaching Hospital becomes one of only a handful of veterinary hospitals in the country performing stereotactic surgery to treat animals with brain disease.

Faculty in the Scott-Ritchey Research Center in final development stages of a potential breakthrough treatment for GM1, a rare fatal disease in both animals and humans.

American Kennel Club grant establishes residency in veterinary reproductive medicine — one of only three awarded in the U.S.

Auburn patented vaccine technologies by Dr. Bernhard Kaltenboeck and Dr. Haroldo Toro lead to advances in the control of the endemic and costly swine disease PRRSV and protection of chickens from the evasive pathogen IBV.

Research by Dr. Benson Akingbemi identifies the harmful effects of BPA – a compound found in many food containers — on adult male testis function from early-life exposure.

Veterinary faculty and students collaborate with School of Forestry and state conservation agencies to reintroduce the Eastern indigo snake to Alabama in efforts to control the state’s venomous snake population.

War Dog monument installed on Auburn Vet Med campus, a replica of the original on Guam, donated by Betsy Putney and inspired by the WWII leadership of her late husband Dr. William Putney ’43.

Academic exchange program established with University of Austral in Chile for Auburn DVM students to learn international veterinary techniques not available in the U.S.

“Tiger,” War Eagle VI, flies during the opening ceremony of the 2002 Winter Olympics.

Critical care program established in the Veterinary Teaching Hospital, one of only five in the U.S.

Construction of new lameness arena planned to aid in diagnosing of equine patients.

Linear Accelerator Laboratory, one of only two in the nation at the time, constructed to replace cobalt unit in use since 1966.

Department of Pathobiology established to combine pathology, parasitology and microbiology.

Holland Ware, philanthropist and timber businessman from Georgia whose dogs had been patients at Auburn, donates funds to build and equip a state-of-the-art expanded imaging center on campus.

Treatment station for eagles established at Auburn after 13 injured bald eagles were admitted for emergency care to the Southeastern Raptor Rehabilitation Center.

Champion thoroughbred Bold Ruler comes to Auburn for successful treatment of a malignant nasal tumor, prolonging his life for one breeding season and expanding his exemplary bloodline by 33 foals.

Eight female DVM students graduate – the most ever in the history of Auburn veterinary medicine to that point.

Calvin W. Schwabe, the Father of Veterinary Epidemiology credited with coining the phrase “One Medicine,” earns DVM degree from API.

Department of Surgery and Medicine divided into Small Animal and Large Animal divisions.

Dr. William Putney ’43, Commander of 3rd War Dog Platoon, leads a battalion of U.S. Marines and War Dogs to help secure the liberation of Guam from the Japanese in WWII.

After paralyzing the South’s cattle industry, the cattle tick eradicated in Alabama due to the work of Cary and API

Graduate education begins at the School of Veterinary Medicine.

Tuberculosis Eradication Program among Alabama’s dairy herds proved effective after years of intense, state-wide effort during which Cary and his team tested more than 60,000 dairy cows.

As a result of combined API and USDA efforts led by Cary and widely considered “the finest example of the practice of One Medicine,” Alabama becomes one of the first states in the nation to implement the use of Tuberculin to detect TB in cattle, enforce public meat and milk inspection and incorporate the pasteurization process.

Cary lobbies city of Montgomery to begin meat and dairy testing; as a result, it becomes the first city in the nation to implement food supply safety initiatives through food inspections.