A new golden eagle will join Auburn’s famed eagle roster this season to soar over Jordan-Hare Stadium before the Tigers hit the field.

Golden eagle Aurea, which actually made her stadium flight debut last season prior to the Liberty game, will join gameday veteran Spirit, a bald eagle, as one of two eagles that will carry on the traditional Auburn pregame flights.

Fellow golden eagle Nova is Auburn’s official eagle as War Eagle VII, but he has been sidelined since 2016 with a heart condition and does not fly before games. “Nova still makes numerous appearances at our educational shows throughout the year, but we don’t take him to games, even on the sidelines, because of the possible stress on his heart,” said Andrew Hopkins, assistant director of raptor training and education at the Southeastern Raptor Center in the College of Veterinary Medicine.

Aurea was brought to the raptor center in 2016 after being found near Selma, Ala., with an injury to her right wing. Auburn veterinarians brought her back to good health, but the aftermath of the injury causes her to have more drag during flights. 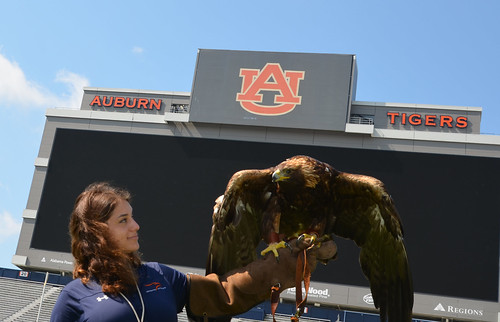 na isn’t quite good enough for her to be released into the wild, but it doesn’t affect her flying in the stadium because she’s not chasing a live animal,” Hopkins said.

To help determine Aurea’s flight issues, the College of Education’s Department of Kinesiology used a high-speed camera to capture detailed video of Aurea’s flights versus Nova’s perfect flight movements. “That’s when we could see her wing wasn’t being pulled in as far as it needs to be,” Hopkins said.

Which eagle will fly at each game? Even the trainers usually don’t know until an hour before kickoff.

“We will bring both eagles to the stadium and look at their game face, or demeanor, and decide which one we want to use,” Hopkins said. “Of course for games like the military appreciation game, we like to use bald eagle Spirit.”

Spirit, a 23-year-old female, has a wingspan of 6 feet and weighs 6.6 pounds. She has been making pregame flights since 2002 and is the only bald eagle to ever make pregame flights in Jordan-Hare Stadium.

While Aurea will be making only her second gameday flight this fall, she has been a fixture in the raptor center’s educational programs since 2017, taking part in nearly 400 presentations around the Southeast.

Fans in town for home football games can attend one of the raptor center’s programs, Football, Fans and Feathers, at 4 p.m. on Fridays before gamedays. Hawks, falcons, eagles and other birds of prey are free-flown from towers and around the amphitheater, enabling visitors to see these raptors flying up close. All birds used in the programs and stadium flights are permanent residents of the center that are non-releasable due to prior injuries or human imprinting.

“We also have online auctions during the football season for our game-specific, decorative lures used during the pregame flights,” Hopkins said. “These help raise funds for the care of the birds.”

More information about the Southeastern Raptor Center and its programs is available on the website at www.auburn.edu/raptor.