It is a rite of the season as surely as March winds and April showers. When spring arrives, so does an increase in the number of raptors, or birds of prey, “rescued” by well meaning Good Samaritans. But do most really need rescuing at all, or are they better off being left where they are?

The Southeastern Rehabilitation Center (SRC) at Auburn University’s College of Veterinary Medicine sees a larger influx of rescued birds in the spring, particularly nestlings or fledglings, according to Stephanie Kadletz, a raptor rehabilitation specialist at the Center. On average, she says, the SRC admits around 50 orphaned or injured nestling or fledglings raptors each year. A nestling will not have fully developed feathers and will have downy feathers on its body and head. Fledglings will have more developed feathering on the wings and tail, but will still have some downy feathers present.

Currently, the SRC has a total of 15 nestling or fledgling raptors that have been admitted due to being orphaned or injured, including great horned owls, barred owls, black vultures and a bald eagle. But while the primary mission of the SRC is to rehabilitate injured or orphaned raptors in the hopes of eventually returning them to the wild, Kadletz is quick to note there are actually many factors to consider before deciding whether to rescue a bird of any age, especially if it is a raptor.

In the case of adult birds, before taking any action at all it is critical to determine whether the bird is truly injured. “Observing the bird from a distance to see its natural behavior is the first step,” Kadletz says. “Regardless of age, if a raptor is injured, it needs help immediately. If the bird is not standing, has an obvious injury, wing droop, visible bleeding or flies swarming around, it needs immediate assistance.”

Do not assume, however, that a raptor is injured just because it is on the ground. “Many times, birds can be found on the ground and be perfectly healthy,” Kadletz explains. “Some raptor species, such as black or turkey vultures, do not build nests in trees, but on or near the ground. We do not want to remove these healthy birds from their environment, even if an adult is not around. 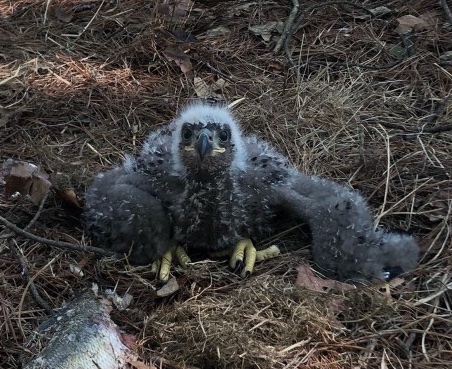 “Other species of raptors that are having a meal, or just finished a meal, may also be found on the ground,” she adds. “If a bird is eating, it may not leave, and will often aggressively protect its food. Also, a fledgling raptor may be on the ground. But most adult raptors should fly away when approached by a human. If an adult bird is approached and does not fly or move away quickly, that could be cause for concern for an injury or illness.”

If it is obvious a raptor is injured, Kadletz says, there are a series of steps that need to be taken. If possible, the first call should be to a rehabilitation specialist, who has the proper skills and permits to handle such birds. With their sharp beaks and talons, raptors can be difficult and dangerous to handle, so the safety of the would-be rescuer is the top priority. If there is no rehabilitator available and you are not comfortable with capturing the raptor yourself, there may be other options, such as calling animal control or your local game warden.

If the situation is critical and you decide to transport the raptor yourself, there are precautions to take to ensure the bird can be moved safely. “We suggest using thick gloves and getting some type of container that can be safely secured,” says Kadletz. “Place the container over the top of the bird, then slide something underneath and secure the lid tightly. Always avoid touching the raptor’s feet or head due to the potential for injury. You can also throw a blanket or towel over the bird and gently place it into the container. Transporting it to the nearest raptor rehabilitation center as quickly as possible will provide it with the best chance of survival.”

In the case of nestling or fledgling birds, the SRC’s recommendation is slightly different. “If most raptor nestlings, such as hawks, owls, and falcons, are found on the ground, they will need some assistance,” Kadletz says. “First, make sure the raptor is not injured. Next, try to locate the nest. Many times, the nests are high and may not be easily reached. But getting these nestlings back up into the tree for the parents to continue their care is very important.

“If possible, assist these nestlings by making a new nest,” she continues. “A small plastic laundry basket, with holes drilled in the bottom, or a wicker basket can be used. Add nesting materials such as pine straw and sticks. Then secure the new nest as high as possible in the tree the nestling was found under. Place the nestling into the new nest and watch from a distance for 24 hours to make sure the parents are continuing to care for it. If you touch the bird when moving it into this new nesting box, the parents won’t reject it just because a human handled it. Most raptors do not have a highly developed sense of smell.”

When a bird is a fledgling and about ready to leave the nest anyway, the SRC recommendation is different. If the raptor does not look injured, it should be fine to leave it where it is found. Only if the fledgling is found in an unsafe location, or is in immediate danger, should it be moved. In such a case, using thick gloves and a towel and box, a fledgling can be gently picked up and moved out of harm’s way.

“This is a critical age for learning,” says Kadletz, “when young raptors are learning to fly and navigate their habitats. The parents are likely still around watching over these young birds and caring for them, but that may not be obvious. A fledgling raptor might not be able to fly for a few days and may stay on the ground as it practices and builds its muscles, but if the bird is not in harm’s way, it’s best not to intervene in the natural process.”

Finally, Kadletz and the SRC like to remind potential rescuers that many wildlife species are protected and regulated through the state, while migratory birds are also protected through the United States Fish and Wildlife Service (USFWS). In Alabama, all injured, orphaned and ill wildlife must be transported to a licensed wildlife rehabilitator within 24 hours of rescue. When it comes to endangered species, threatened species or bald and golden eagles, it is always advisable to contact the USFWS or the Department of Natural Resources or Fish and Wildlife in your state, as those raptors are protected under the Bald and Golden Eagle Protection Act. As with any raptor species, great caution should be taken when attempting to rescue and transport injured, orphaned or ill eagles to a rehabilitation center, and it is important to transport them as soon as possible.