Aurea, Auburn University’s War Eagle VIII, will be on the Tiger’s injured reserve list briefly at the beginning of the 2022 Auburn football season. The golden eagle that has acted as Auburn’s official War Eagle mascot since 2019 recently had to have one of the digits of her left foot removed in a procedure conducted at the College of Veterinary Medicine’s Bailey Small Animal Teaching Hospital. 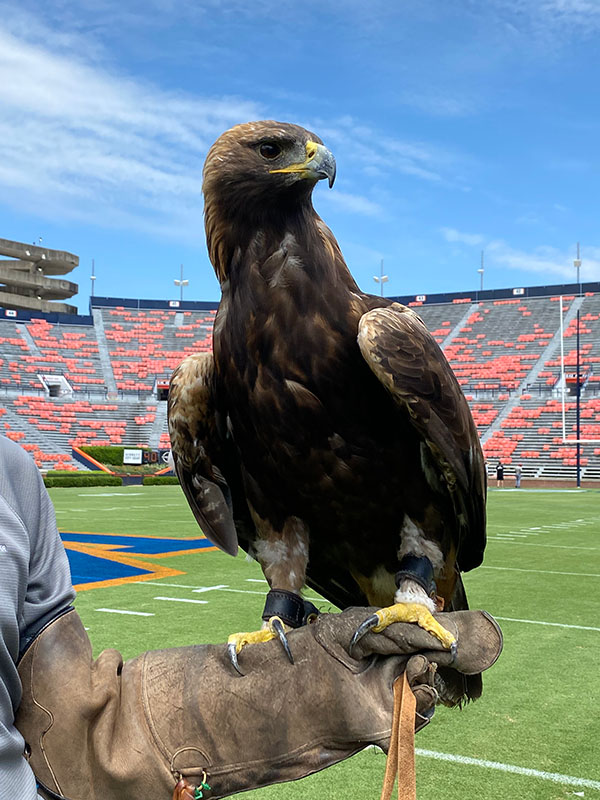 According to Andrew Hopkins, assistant director of raptor training and education at the college’s Southeastern Raptor Center (SRC), the amputation became necessary in late July after Aurea developed an infection in the digit that would not heal properly. Her treatment was overseen by Dr. Seth Oster, assistant clinical professor in the Department of Clinical Sciences and the SRC’s primary veterinarian, who determined the procedure would be necessary.

Dr. Kaitlyn Hlusko, assistant clinical professor of small animal surgery, conducted the surgery. “The surgery was uneventful,” Hlusko said. “We submitted her digit for a biopsy and the results were consistent with chronic inflammation and trauma. Happily, no underlying cancerous or infectious organisms were found.”

Dr. Oster has overseen Aurea’s recovery and reports that his famous patient is on the road to full recovery. “Surgery went well, and her bandages and sutures were removed at the beginning of August,” Oster said. “I am happy to say Aurea is back to training and is acting like her normal self again. In raptors, this particular digit is very important for their ability to grip and grasp. We have not seen her show any signs of lameness, but we will continue to keep a close eye on her over the coming months. Overall, however, she is doing very well and this should not hinder her ability to fly, eat or grasp with her foot.”

While Aurea is limited to rehabbing on the sidelines, Hopkins said the SRC’s bald eagle, Independence, or Indy, will handle flight duties early in the season. Auburn’s beloved pre-game eagle flight before each Tiger home football game is an event that has become one of the most spectacular and well-known traditions in all of college football.

“The digit Aurea had removed was her biggest and longest, so it was important for her balance,” he noted. “Her rehabilitation involves her gradually getting used to flying and retaining her balance without that extra stability, but she is adapting very well and has already begun flight training at Jordan-Hare Stadium. It will be great to see her soaring again this season.”