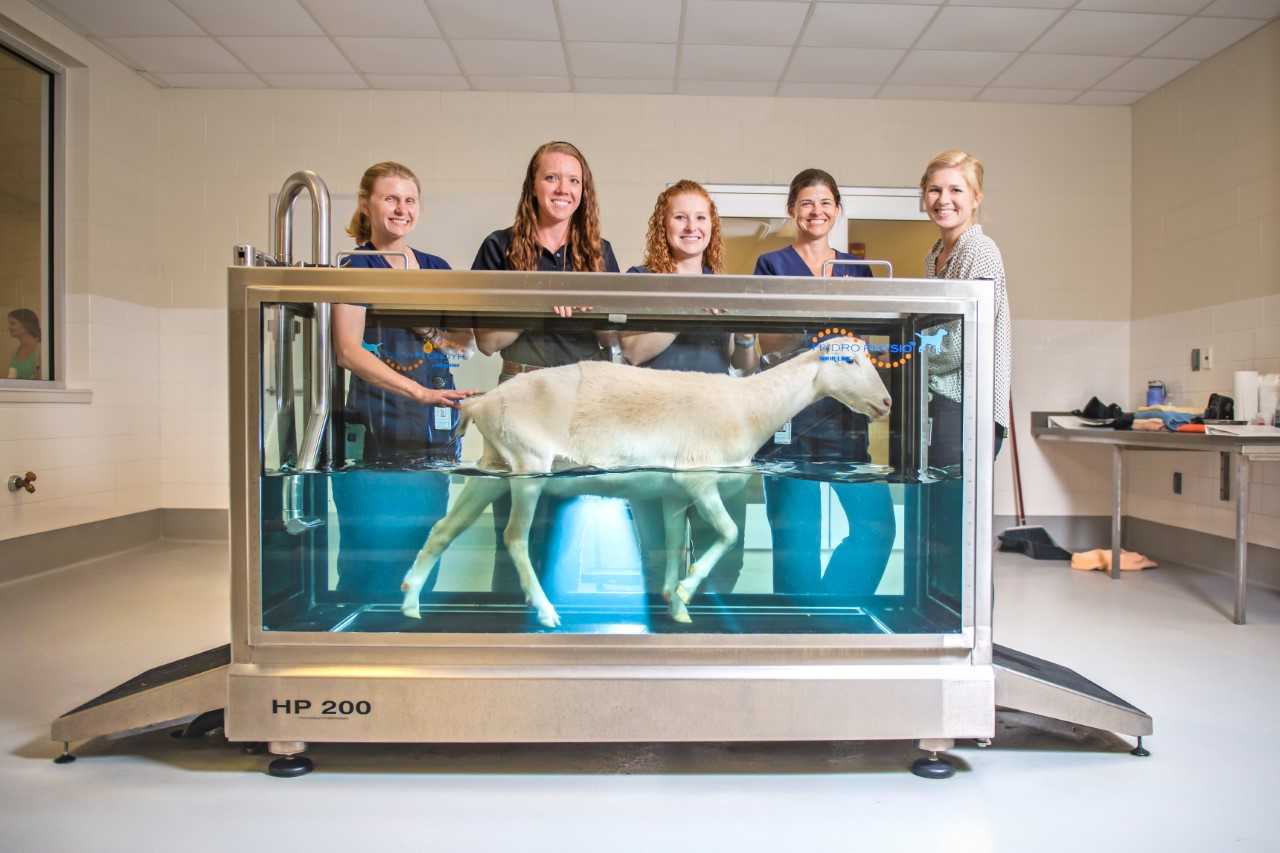 Fiona the goat may have been the “low doe on the totem pole” in the Auburn College of Veterinary Medicine’s research and teaching herd during her recent stay there, but according to faculty, staff and students who have worked with her after surgery for a chronic hip luxation and her subsequent rehab, the five-year-old Lamancha goat is a true diva in her own right.

A dairy goat then known as “goat #5,” no one realized Fiona was a budding superstar when she was originally donated to Auburn’s J.T. Vaughan Large Animal Hospital after suffering an unknown injury that resulted in hip displacement. “Goats are very active and love to climb on top of things in the pasture,” according to Dr. Jessica Rush, DVM, assistant professor in the Department of Clinical Sciences, Food and Fiber Animal Services. “Due to her injury, #5 was not able to remain as a production animal, but her owner cared about her and knew if he donated her to the university she would be cared for properly.”

Proper care in Fiona’s case was surgery (femoral head ostectomy) for what was diagnosed as “chronic hip luxation,” which involved removing the head of the affected femur and mooring her lower leg bone in muscle. “This surgical procedure is commonly performed in dogs that have sustained traumatic injury resulting in hip luxation, or in young dogs with congenital malformation of the hip joint” says Rush. “Since Fiona was a dairy goat and therefore lighter than a meat goat, it was a good option for her as well.”

Once her surgery in the large animal hospital was complete, Fiona moved to the Wilford and Kate Bailey Small Animal Teaching Hospital for rehabilitation therapy. It was there she began making a name for herself among her caregivers as a goat alternately described as a “delicate flower,” a “rock star” or a “little angel.”

“Our goal with Fiona was for her to increase the use of her injured leg and to add muscle mass,” says Rehabilitation Technician Elizabeth Hodson, who oversaw Fiona’s rehabilitation during the next four weeks. “Her program was formatted the same way as our rehab strategies for dogs—leash walks, climbing and descending ramps, jumping hurdles, balance training and working out on the underwater treadmill.”

As soon as Fiona’s rehab commenced, it became clear she was a very special patient. “She’s very smart,” explains Hodson. “She was willing to do everything we asked during her workouts and soon started doing her rehab routine on her own whenever she wanted attention or food. She also learned to operate the motion sensor on the paper towel holder, so we had to keep an eye on her all the time. She just loved snacking on paper towels.

“The students who worked with her really enjoyed her personality,” Hodson adds. “They hated to see their rotations with her end. She’s very dog-like. She’s affectionate and seeks out interaction with people. She just became a College-wide celebrity.”

With surgery and rehab successfully behind her, Fiona took leave of her adoring fans and returned to the harsh reality of being a goat when she joined the College research and teaching herd. There her gentle demeanor didn’t count for much. “Goats establish a hierarchy within a herd,” says Rush, a veteran of herd behavior. “She had a lot of things working against her as a dairy goat in a herd of meat goats. As a Lamancha doe she does not have horns either. She had to start at the very bottom.”

Hodson adds that for the small animal clinicians, Fiona’s sudden drop in status from superstar to supporting role was a little hard to watch. “The small animal staff really took it to heart because we’re not so used to herd behavior. It was tough to see the other goats didn’t appreciate her like we did.”

Happily, it appears Fiona’s story is headed for a Hollywood ending. She has been removed from the herd and is likely to be purchased by some lucky staff member. She may eventually even star in the role of an education animal, used by the College in school and other programs to educate people about her species.

It’s a role, according to her fans, that Fiona the diva goat was born to play.