It is what no parent wants to hear: “Your child is dying. There is no cure.”

Ryan and Jenny Bragg of Hoover are the most recent parents to hear that when a physician told them their two-and-a-half ye
ar old daughter, Clara, has GM1 gangliosidosis. “It was Aug. 11 and the diagnosis came out of the blue,” said Ryan. “It was a real kick in the gut.”

Porter, the first case of GM1 in Alabama, and his parents, both Auburn alumni, made a lasting impact on the researchers and staff at the Scott-Ritchey Recent Center at the College of Veterinary Medicine, where scientists have worked for more than four decades on a cure for the disease in cats, and then to move that successfully to humans.

Recently, the name of the fund account for gifts for GM1 research at the College of Veterinary Medicine was renamed Porter’s Fund to honor the work of the Heatherly family to raise awareness of the research, and to memorialize Porter.

These parents and others have banded together – linked by love for their child and a terrible disease – for a cure. They are using social media to tell their stories to bring attention to the potential treatment.

The Heatherlys and the Braggs joined forces with Christine Waggoner and her husband, Doug Dooley, of California to raise awareness of and funding for GM1 research being conducted at the College of Veterinary Medicine and the UMass School of Medicine, part of a consortium of reseachers who developed a gene therapy vector being vetted for human clinical trials in 2017. 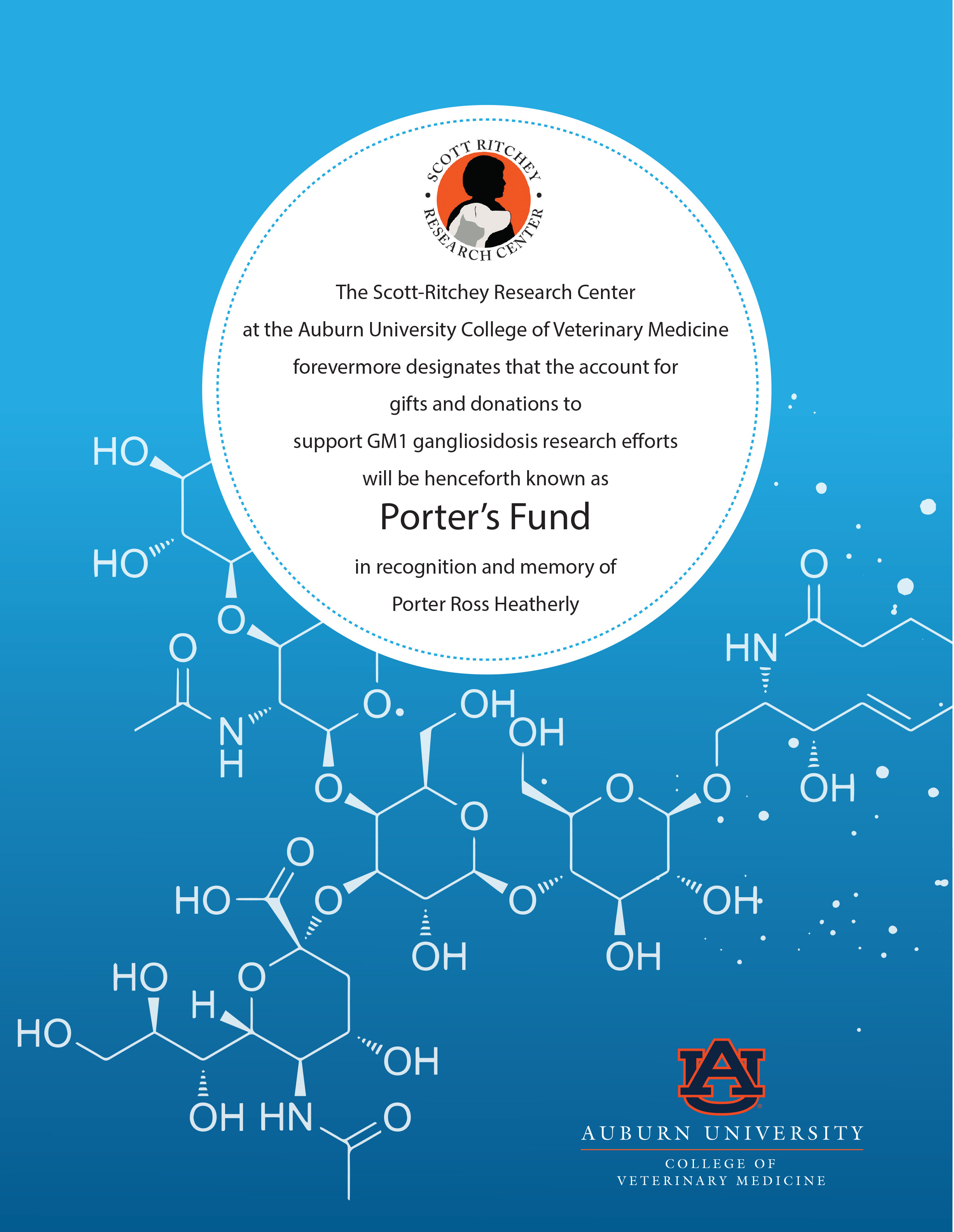 The development of a treatment for GM1 gangliosidosis using AAV gene therapy was initiated in 2005 by Martin, a professor in the Department of Anatomy, Physiology and Pharmacology at Auburn, and Dr. Miguel Sena-Esteves, associate professor in the Neurology Department and director of the Gene Therapy Center at the University of Massachusetts Medical School.

GM1 glangliosidosis occurs when the body does not produce enough of a specific enzyme, β-galactosidase (βgal), which recycles molecules from the body.  When the molecules build to abnormal levels, they progressively destroy the body’s nervous system. The earlier the onset in children, the quicker the disease kills.

“There is no question now the disease can be treated successfully,” said Dr. Martin. “We have seen how it has worked in cats with the disease and how it is has extended their lives as healthy animals.”

Cure GM1 was founded by Waggoner and Dooley in honor of their daughter, Iris, who suffers from Juvenile GM1.  To date, they have raised more than $1.2 million, but their goal is to raise enough to get the treatment developed by Dr. Martin and a team of Auburn researchers to clinical trials at the National Institute of Health next year, which will take nearly $2 million.

For the Bragg family and others, the college’s research has become their hope.“Having the diagnosis has been strangely helpful, because before we were just spinning our wheels trying to figure out what was going on,” said Jenny Bragg. “Now we have something to work toward even though it’s among the worst diagnosis ever.”

The Braggs, Texas natives, moved to Alabama in 2014 from California through his position at PepsiCo/Frito-Lay. Clara was about 15 months old and, while she was enrolled at a daycare, they noticed that she wasn’t reaching the same developmental level as other children her age.

“We started early intervention by seeing specialists at UAB,” Jenny said. And after numerous tests, none giving them a diagnosis, the parents enrolled her in physical therapy. It was another doctor’s appointment that led to an answer. The neurologist recommended that the family enroll in a study through the UAB-HudsonAlpha Center for Genomic Medicine. They soon had an answer.

“We were blessed with the opportunity to enroll in this study and we rejoice in the fact that she is not yet regressing,” Ryan Bragg said.

Within 48 hours of the diagnosis, Ryan Bragg had researched the disease on the internet, learning about the college’s research efforts, and was on the telephone with Dr. Martin. “He was very kind and spoke to me for 45 minutes, providing more information,” Ryan Bragg said.

“That conversation shifted the course for us. The door is not closed and there is hope.”

After taking to Christine Waggoner, the Braggs became more encouraged and have become advocates of the disease. “We were spurred into action very quickly, learning as much as we could.”

While they say they are realistic, they believe that Clara could benefit from the clinical trial. “We believe there is a real chance. We recognize that time is critical, not just for Clara but for other children carrying the disease,” Jenny Bragg said. And while they are not use to the spotlight, the couple decided to share their story, saying the disease “forced us to act.”

The family has created a website, ACureforClara.com, and enlisted family and friends in the fundraising process. “Hopefully it will make a difference,” she said. “We need so much support.”

“We want people to know that there is a cure that has been found in the laboratory and in animals,” Ryan Bragg said. “The number 1 thing we need is money. We are not going to stop until it is funded, there is not a choice to do otherwise.”

The goal of all three families is to move giving to a larger arena, beyond family and friends to the public at large. “We’ve always been charitable people, giving to many worthwhile organizations,” Ryan Bragg said. “But never once have we been presented with the opportunity that one day we could say that a disease has been cured because of our donation.

“Literally two years from now, we might be able to look at this situation and say that,” Ryan Bragg said. “But more importantly, it would have a profound impact on other parents to never have to hear the words we heard from a doctor.”