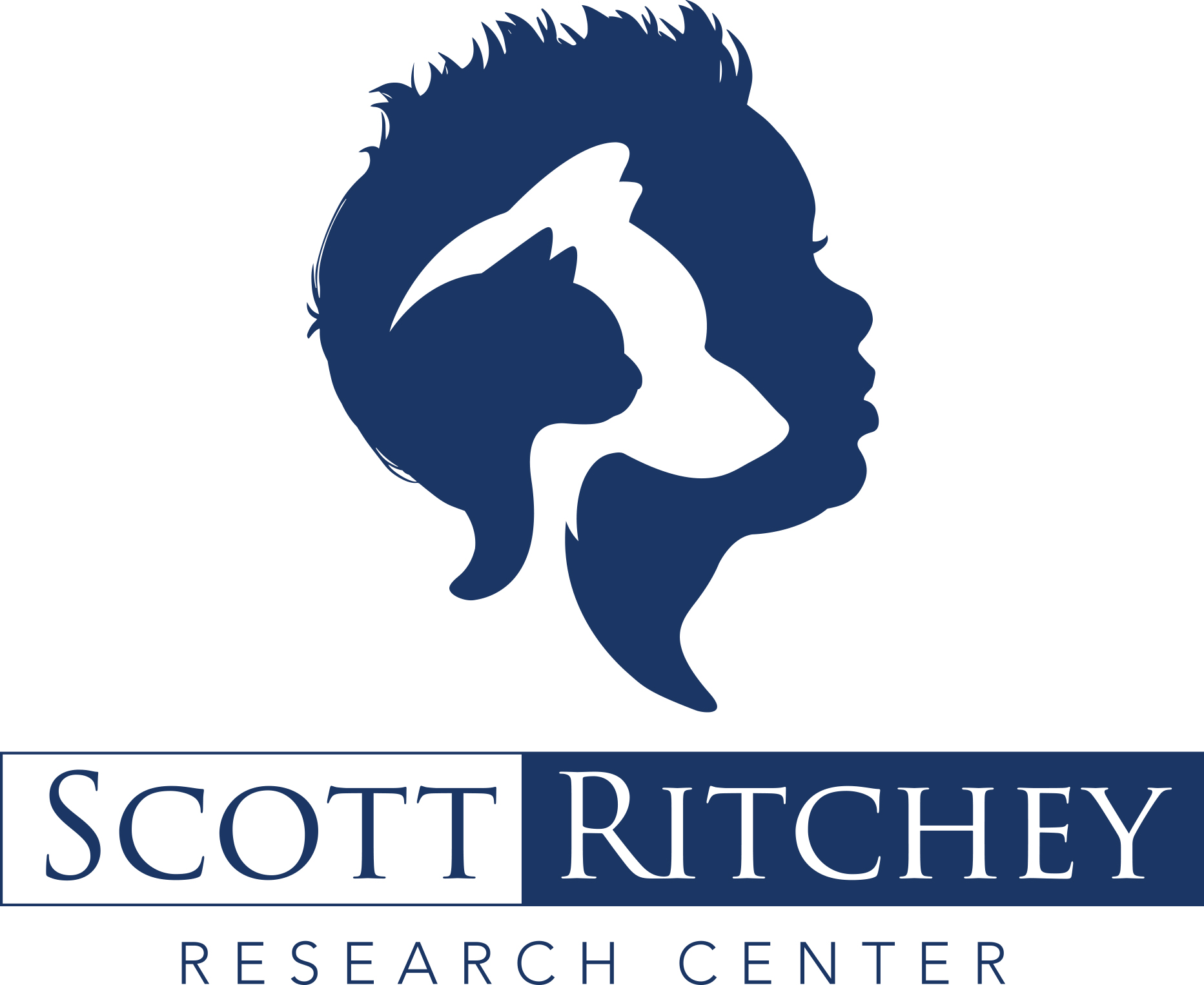 The Scott-Ritchey Research Center is an integral part of Auburn University and the College of Veterinary Medicine for more than 40 years.

The Scott-Ritchey Research Center mission is to conduct cutting-edge basic and translational research to improve the health of dogs and cats, and to communicate these findings to the clinical and scientific communities to facilitate their application.

The Scott-Ritchey Research Center is a state-of-the-art, interdepartmental and interdisciplinary research program at the College of Veterinary Medicine. The center relies on private and grant funds for a majority of its ground-breaking research.

THIS IS HOPE FOR A CURE

This milestone marks the first patient with GM1 gangliosidosis treated with gene therapy created through research alliance between Auburn’s Scott-Ritchey Research Center at the University of Massachusetts.

For more than four decades, Scott-Ritchey researchers have sought a cure for GM1 gangliosidosis, a rare, neurodegenerative disease found in animals and humans. Today, Dr. Doug Martin and a team of Scott-Ritchey Research Center scientists believe they have found a cure for the disease. His research, an extension of work that began by mentors Dr. Henry Baker and the late Dr. Nancy Cox, is a gene therapy to produce enzymes found missing in GM1 and Tay-Sachs-related diseases.

WATCH a video about current research efforts to cure GM1.

Martin and his team have successfully extended the life expectancy of cats by more than five times compared to non-treated GM1 cats with the use of gene therapy, a non-harmful viral vector to produce enzymes missing in GM1 and Tay-Sachs-related diseases.

“There is no question now the disease can be treated successfully,” Dr. Martin said. “We have seen how it has worked in cats with the disease and how it is has extended their lives as healthy animals.”

Now, the goal is human clinical trials, slated for early 2019 at the National Institutes of Health. The Tay-Sachs Gene Therapy Consortium, an international collaborative group of scientists committed to searching for a cure, have developed and tested the vector based on the adeno-associated virus (AAV).  Read about the most recent research effort.

In 2013, Michael and Sara Heatherly, both Auburn alumni, received the devastating GM1 diagnosis for their son, Porter, at just four months old. Soon after, they learned of the ongoing research at Scott-Ritchey and believe that this research gives families’ hope.  Porter Heatherly died Nov. 10, 2016, but the fight continues.

Now, a second child in Alabama was diagnosed with GM1. Clara, the daughter of Ryan and Jenny Bragg of Hoover, is spunky and full of life. Diagnosed with juvenile GM1, the Braggs are on a mission to raise money for the clinical trial, which they believe will help Clara. Watch the Bragg’s video.

Read about families raising money to fund a cure for GM1 , and the feature on the Bragg family in Alcalde magazine.

How can you help?

Make a donation to support GM1 research online through the Auburn University Foundation. Gifts given to 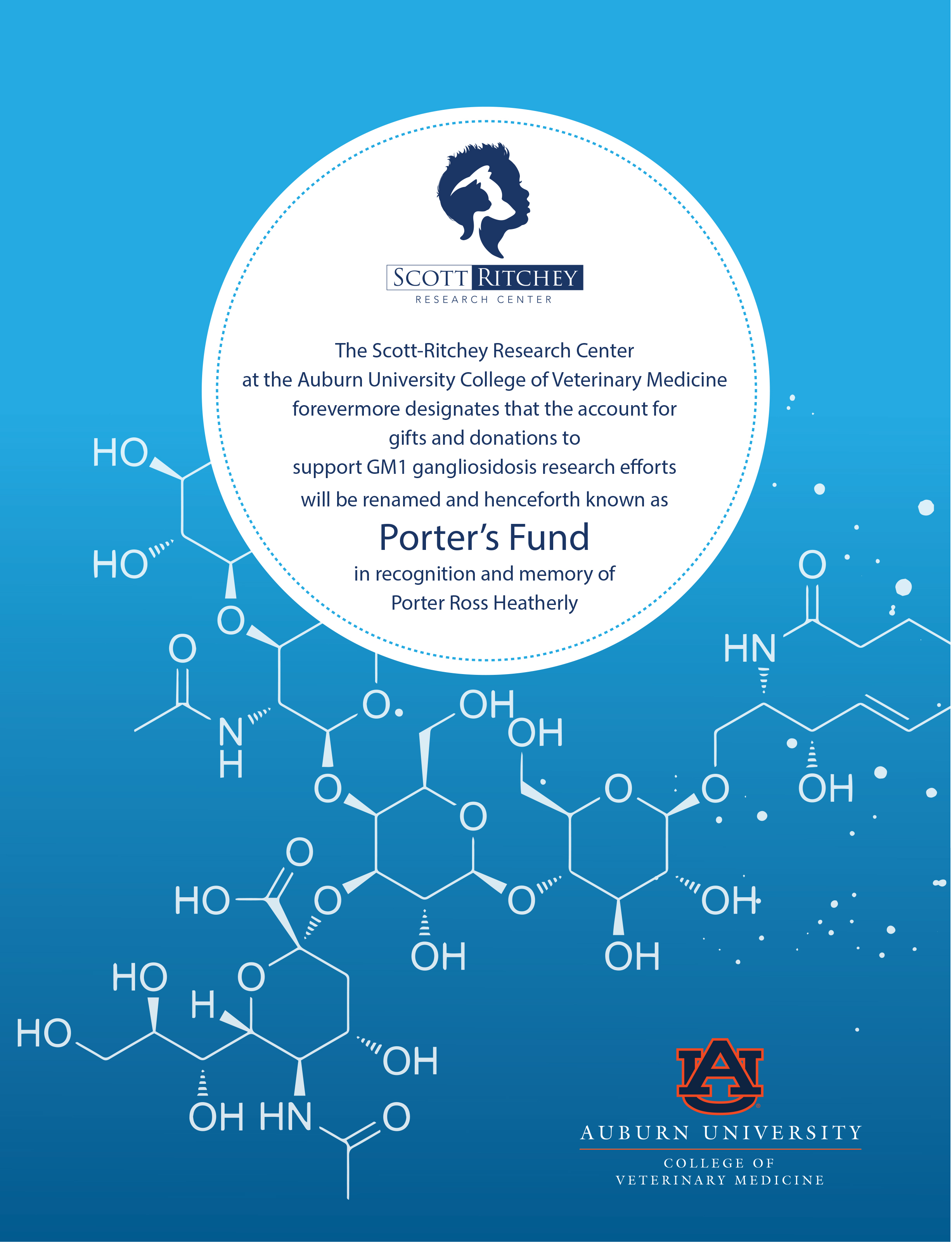 support GM1 research are designated to “Porter’s Fund” in honor and memory of the late Porter Heatherly, who passed away Nov. 10, 2016.

Gifts by mail should be made out to Auburn University Foundation and sent to the attention of:

Scott-Ritchey currently has several programs that are bridging the gap between human and animal medicine, unifying under the theme of One Health. One Medicine to make advancements in treatment and medicine that will benefit humans and the animals we love. Scott-Ritchey’s current projects are:

You can support the Scott-Ritchey Research Center through a number of ways:

To give to any of these important efforts, please complete the Scott-Ritchey Donation Form and mail to the address indicated on the form. If you have any questions or concerns, please call 334-844-5951.

History of the Center

The organization presently known as the Scott-Ritchey Research Center is the result of the vision of Dr. B.F. “Frank” Hoerlein, professor and chairman of Small Animal Surgery and Medicine. Dr. Hoerlein was committed to research for the advancement of companion animal health, but lacked the financial support and facilities needed for this important work.

In 1955, Mr. Kenneth A. Scott, an avid field-trial dog competitor, offered to contribute money to support Dr. Hoerlein’s research using a matching formula, which gave Dr. Hoerlein the essential start needed to build a viable research program. Donations to the Scott Fund were solicited from graduates of the Auburn University College of Veterinary Medicine, usually in the form of memorials for their client’s animals. Dr. Ivan Frederickson, a veterinarian in Fort Lauderdale, Fla., approached one of his clients, Miss Eleanor Ritchey, and suggested that she consider donating to the Scott Fund. Miss Ritchey was well known for her love of animals, and in particular, dogs.  However, she did not respond immediately to Dr. Frederickson’s suggestion. Following her death in 1968, it was revealed that she had committed her entire estate to create a much-expanded version of the modest beginnings supported by Mr. Scott. The Ritchey bequest provided a stable endowment and was used to construct a  2,000 sq. ft. research building in 1984. The endowment provided sufficient income to support a full-time research faculty and technical staff.  Based on this endowment, the Scott-Ritchey Research Laboratory was established with Dr. Hoerlein as its first director.

Dr. Hoerlein’s personal research interests and that of the early faculty focused on neurological diseases of dogs and cats. Over the years, under the leadership of subsequent directors Dr. Steve Swaim and Dr. Henry Baker, research topics have included molecular medicine, infectious diseases, inherited diseases, nutrition, reconstructive surgery and other topics.  In 1992, the name was changed to the Scott-Ritchey Research Center to identify it as an interdepartmental, multi-disciplinary unit within the College of Veterinary Medicine. Today, Center scientists conduct research and collaborate with other faculty at the College of Veterinary Medicine, Auburn University, and institutions worldwide on projects focused on companion animal health. Research conducted by center scientists has been supported by the National Institutes of Health (NIH), the Kemper Fund, the AVMA Foundation, the Mathers Foundation, Michelson Grants/Found Animals Foundation, National Tay-Sachs and Allied Diseases Association, the Morris Animal Foundation, and other private and commercial entities.

Since its inception, the Scott-Ritchey Research Center has been a pace-setter for research devoted to improving the health of companion animals. No other organization of its type exists elsewhere, even today. Miss Ritchey took a bold step and unfortunately was ridiculed by some of the press, who characterized the project as “millions gone to the dogs”. But for those who have enjoyed the unconditional love and companionship of a pet dog or cat, the true legacy of Miss Ritchey’s fateful decision is understood clearly and appreciated.

Dr. Hoerlein’s dedication and skill as a teacher, clinician and scientist and his tremendous accomplishments in small animal medicine, as well as those who have followed in his footsteps, would never have been achieved without the understanding and generosity of Mr. Scott and Miss Ritchey.

Together these three visionaries created a remarkable Research Center which continues to serve the objectives about which each of them felt so strongly. If you would like to build on the legacy left by Dr. Hoerlein, Mr. Scott and Miss Ritchey, please consider supporting the center’s research programs.