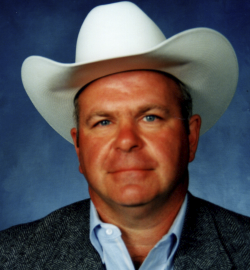 Dr. Warner grew up in north Louisiana in a family run cow/calf and stocker operation. His dad moved the family to Ferriday, Louisiana in 1965 where his dad operated an auction barn and continued in the cow/calf business and was also a procurer of replacement cows. Dr. Warner received a BS from the University of Louisiana at Monroe in 1977 and received his DVM degree from the Louisiana State University School of Veterinary Medicine in 1980. Immediately after graduation, Dr. Warner entered clinical practice as a mixed animal associate at Elgin Veterinary Hospital. After 2 years of employment, he became a partner and developed a primary interest in large animals and eventually, just beef cattle practice. Today, the practice is largely referral based, focusing primarily on lameness and reproductive problems in both the male and female. Dr. Warner has been actively involved with the Professional Bull Riders as a consultant and practitioner for many years, providing for animal welfare and the well-being of the animals involved in their sport. He sustains a very active presence within the industry.

Other practice interests involve the purebred and show cattle industries and servicing the needs of individual producers. He has been actively involved in the show steer industry in Texas, helping many children with their projects and even raising a few of his own. All three of his children grew up showing steers with many championships. Two of his children, Dr. Jenna Beyer and Dr. Kelly Warner, now practice veterinary medicine and the youngest, Jacob, is a 2nd year veterinary student at Texas A&M University College of Veterinary Medicine. Dr. Warner is a career-long member of AVMA, TVMA, (served as longtime member and chair of The Beef Practice Committee), AVC, AABP, PAC and the Society for Theriogenology, where he served a long tenue on the executive board culminating in becoming president of that organization in 2011-2012. Dr. Warner, along with his wife Terry, remain actively involved in the cattle industry at their ranch north of Elgin; producing show steers and high-quality replacement females. He continues to support the beef cattle production community and is always available to colleagues for consultation.